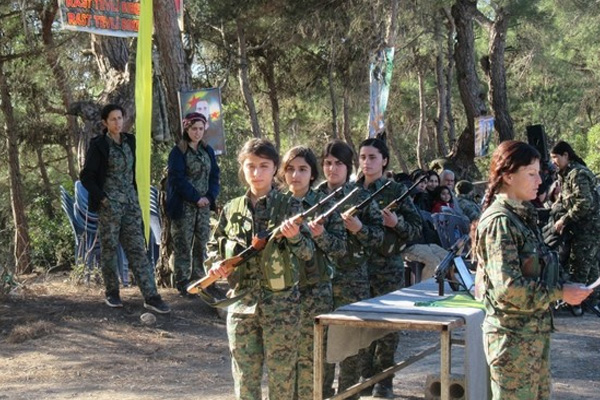 SDF continues to recruit child soldiers, despite pledges to stop the practice

Musa’b (a pseudonym) had always been concerned about the environment his sixteen-year-old son Fawaz was growing up in. His modest income as a crane operator left the family struggling, and he was worried that his son was looking to the People’s Protection Units (YPG), the armed wing of the Kurdish Democratic Union Party (PYD), who patrolled Deir e-Zor as role models, impressed by their status and salary.

“We knew he went to volunteer with the YPG,” Musa’b told Syria Direct. “They told us that he was taken to a training camp. We asked them to return him to us, but they refused.”

Fawaz is one of the hundreds of children who have been recruited by the YPG and the Women’s Protection Units (YPJ), the Kurdish-led militias which makes up the bulk of the US-backed Syrian Democratic Forces (SDF), which is an umbrella of allied armed groups in northeast Syria founded in 2011.

“We cannot communicate with [Fawaz], and we are very afraid he will be sent to the front soon. We hope that he will return to his senses and come back home,” Musa’b added.

However, the recruitment of child soldiers did not stop in 2019, nor in 2020. In fact, the US Department of Defense Office of the Inspector General’s (DoD-OIG) August 4 report on Command Joint Task Force Operation Inherent Resolve (CJTF-OIR) noted that in 2019, “the SDF’s Kurdish components recruited children into their ranks from displacement camps in northeastern Syria.”

The report further added that each year since 2014, the “Kurdish entities partnered with the US” made promises to end the use of child soldiers, but that each year the practice continues.

Though the SDF initially signed a pledge with Geneva Call—a Swiss humanitarian organization that works to “protect civilians in armed conflict”—to stop the use of child soldiers in 2014, its use of child soldiers has only increased since then.
From January 2014 to September 2020, the YPG recruited at least 911 children, according to UN data and data supplied to Syria Direct by the Syrian Network for Human Rights (SNHR).

Though the rate of child recruitment seems to have sharply declined in 2020, it remains unclear how many of those previously recruited have been released from the SDF. In an August 15 meeting with UN officials, the SDF noted that they had demobilized 30 minors in 2019, and 86 in 2020.

Further, according to parents of abducted children in northeast Syria and human rights monitors who spoke with Syria Direct, children are continuing to be kidnapped and recruited by YPG/YPJ-affiliated groups in the area. Syria Direct was made aware of at least 17 such cases of recruitment in 2020.

Every time a child disappears in northeast Syria, their pictures are plastered across social media, rumors swirling as to who could have abducted them. Given the insecure security environment in the region, there could be a variety of actors responsible for these kidnappings.

However, multiple sources, including parents of abducted children, pointed to one group as being the culprit of many of the kidnappings and recruitments: Shabiba al-Thawra (“Youth of the Revolution” in English).

Shabiba al-Thawra, or Ciwanên Şoresger in Kurdish, is a youth empowerment movement located in northeast Syria that is known for its ties to the Turkish Kurdistan Workers’ Party (PKK) leadership based in the Qandil mountains in Iraqi Kurdistan. The group has centers across northeast Syria and offers educational lectures on Kurdish history and nationalism to youth in the area.

Most recently, the group received media attention for attacking the Qamishli office of the Kurdish National Council (KNC), a coalition of 13 Kurdish political parties and the main rival of the PYD, on August 15.

Interviews with parents of kidnapped children and sources with knowledge of Shabiba al-Thawra revealed a methodical and orderly kidnapping process. There are no armed men descending upon families and forcibly snatching children, but rather the meticulous grooming and recruitment of children seen as having the potential to benefit the Kurdish independence movement, both in Syria and abroad.

Shabiba al-Thawra maintains a presence in schools and educational facilities across the Autonomous Administration of North and East Syria (AA), the Kurdish-led political authority running most of northeast Syria. It is there, sources alleged, that the group selects the children it will target.

After selecting children, members of the group approach the children in schools or at sports events and invite them to take classes on the history of Kurdistan and issues important to Kurdish nationalism. These classes can last anywhere from a month to a year before children are sent to a training camp in Ramalien, a town on the outskirts of Qamishli.

One mother, Um Shafan, whose child was kidnapped from Hasakah province in 2015 told Syria Direct that her child began to attend Shabiba al-Thawra classes when he was in the tenth grade. A month later, he disappeared and has not been heard from him since, save a picture his family received of him in 2017 wearing fatigues in the Qandil mountains.

“Shafan [a pseudonym] was an intelligent child who loved sports. He used to go every day to the playground after school. One day he made new friends at the playground and began to come home late every day. When we would ask him where he was, he would tell us he was in lessons,” Um Shafan said.

“He began to talk about Kurdistan, nationalism and the need for liberation. One day, about a month after he started taking classes, he told us he was going to go play football. We haven’t seen him since.”

Shafan’s parents tried to appeal to both the Shabiba al-Thawra center and officials of the AA, but were told returning their son was impossible.

“Our lives have been empty since Shafan left,” Um Shafan added.

Like Shafan’s parents, many families never see their kidnapped children again. However, in the case of Ronida Dari—an 11-year-old girl kidnapped in July from the town of Amuda in Hasakah province—her parents were able to secure her return in August. They were largely able to get her back due to their close relationship with the commanding general of the SDF, Mazloum Abdi, as well as with other PKK leaders.

A spokesperson for Shabiba al-Thawra, Nasser Afrin, denied all accusations of recruiting child soldiers and told Syria Direct that the group works with all groups in northeast Syria, including athletes, students and workers.

Afrin said that while the group maintains no training camps in northeast Syria, there are “academies which organize and educate the youth, as they are a force to change society as well as those enemies of the people in north and east Syria which aim to occupy and destroy the region.”

Shabiba al-Thawra, he added, works to give the youth “more self-confidence and willpower.”

For his part, the co-chairman of the executive board of the AA, Abdulhamid al-Mahbash, told Syria Direct that the AA “does not accept” any parties or movements engaging in kidnapping or conscription, and that “the child’s place is not on the battlefield, but in the classroom.”

He added that the AA is committed to returning any children in the ranks of the SDF to their families and that the new mechanism established on August 29 should make it easier to do so. The press release from the September 15 meeting with the UN noted that the SDF has trained 419 SDF and Asayish (internal security forces) to assist in combating child recruitment.

Though the SDF has been an effective fighting force since its formation in 2015, beating back the so-called Islamic State’s caliphate, it is not a regular, unified military force. Instead, it is a coalition of militias working together under a common umbrella and includes local councils, armed political groups and ethnic militias.

Given the structure of the SDF, it is possible that groups that recruit or kidnap children are difficult for the central leadership to reign in. In the case of Shabiba al-Thawra, the group’s ties to Qandil leadership could make it hard for the AA to interfere with its activities. On the other hand, it’s also possible that the group operates with the tacit consent of the AA in order to complete tasks from which the AA and SDF want to distance themselves.

Can the US partner with a force using child soldiers?

In 2008, the George W. Bush administration passed the Child Soldier Protection Act (CSPA) which, with later amendments, prohibits the US from providing assistance to any governments that “recruit and use child soldiers.”

Though the language in the CSPA states clearly that the US cannot support governments that use child soldiers, the language of the act is more ambiguous when it comes to non-state actors, such as the YPG and SDF.

The CSPA says that the US government should “condemn the conscription, forced recruitment, or use of children by governments, paramilitaries, or other organizations,” as well as help “bring to justice rebel and paramilitary forces that kidnap children for use as child soldiers.”

However, this section of the act was written “in the sense of Congress,” meaning it is merely a non-binding resolution, and effectively a recommended course of action for the US government.

Regardless, the implementation of the CSPA seems to be left largely up to the discretion of the executive branch, which can apply for waivers to the CSPA if the assistance of a country is deemed to be within “the national interest of the United States.” In 2019, the White House granted waivers to Afghanistan, Democratic Republic of Congo, Iraq, Mali, Somalia, South Sudan and Yemen—seven of the eleven countries deemed as having used child soldiers.

A US State Department spokesperson told Syria Direct that it “takes the allegations on the use of children as soldiers in Syria seriously,” and that the SDF has taken “positive steps” on the issue.

Syria Direct also asked CJTF-OIR if its soldiers had received any training or guidance to prevent the use of child soldiers by partner forces, but received no response at the time of publishing.