Home Who is PKK?

Founded by Abdullah Ocalan in November 1978, PKK/Kurdistan Workers’ Party aspires to establish a state of “Kurdistan” on designated parts of Turkish, Iraqi, Iranian and Syrian soil.

PKK members had initially been trained at the Bekaa Valley of Lebanon while in 1982 they were placed in camps in the north of Iraq, as prompted by Syria. The solidarity agreement signed with KDP/Kurdistan Democratic Party in 1983 provided PKK with a wide range of logistic means though KDP unilaterally nullified the agreement in 1988. With PUK/Patriotic Union of Kurdistan stepping in to PKK’s rescue, the group regained an assortment of capabilities.

Indiscriminate in targeting civilians and security personnel alike, PKK is an active threat against the security of the countries of the region.

While mounting acts of terror in Turkey, Iran, Iraq and Syria, PKK also seeks to exert pressure upon people and entities through its affiliated organizations in Europe and raise money by extortion.

In 2015 and 2016 PKK sought to test its power by establishing self-proclaimed ‘liberated zones’ in certain parts of eastern and southeastern Turkey though the group failed to get the expected level of support from the public; thus PKK’s rhetoric of ‘self-declared autonomy’ did not go beyond lip service. 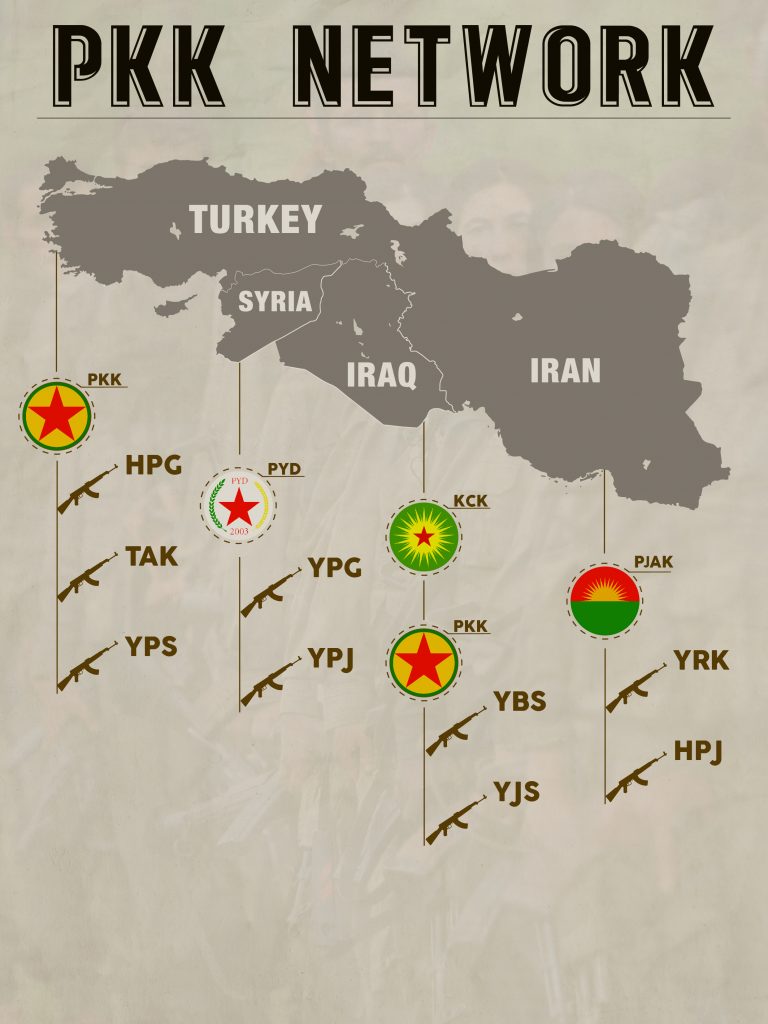 PKK (Kurdistan Workers’ Party) is the armed organization aiming to proclaim a state in the area extending from the east and southeast of Turkey to the north of Iraq and from the northeast Syria to northwest of Iran. To that end, PKK/KCK has been mounting terrorist acts against military targets, state officials and civilians in Turkey to lay its claim on the designated strip of land on Turkish soil.

HPG is the abbreviation for People’s Defense Forces and is considered PKK’s armed apparatus. HPG conducts acts of violence in accordance with PKK objectives and strategy.

TAK (Kurdistan Freedom Falcons)was founded with a view to mount high-profile attacks in urban centers. It is no secret that PKK has been using TAK as a surrogate to circumvent its terrorist image and to shift the pressure it faced in the international arena. TAK attacks are conducted under direct command from PKK’s senior leadership though PKK claims TAK’s complete independence from PKK. PKK never claims responsibility for TAK attacks.

YPS (Civilian Defense Units) is the armed group operating under PKK command in the eastern and southeastern Turkish cities. YPS describes itself as the ‘self-defense forces’. It was created in December 2015 when the YDG-H/Patriotic Revolutionary Youth Movement united with the group called Self-Defense Units.

PYD (Democratic Union Party) is a political party established by Syrian Kurds in the north of Syria in 2003. Amnesty International’s report of October 13, 2015 underlined ‘the deliberate demolition of the areas in the north of Syria predominantly populated by Arab and Turkmen civilians by PYD and its military wing YPG’ referring to ‘forced displacement of civilians, human rights violations and war crimes committed’ while PYD admitted that violations took place to a certain extent.

YPG is the military wing of PYD and it stands for ‘People’s Defense Forces’.

PJAK is a proscribed terrorist organization in Turkey, Iran and US and a member of KCK/Kurdistan Union of Communities. PKK/Kurdistan Workers’ Party is a member of KCK as well. PJAK conducts armed attacks against military targets and civilians in Iran.

YRK (East Kurdistan Defense Units) is the armed wing of PJAK in Iran. Mounting armed attacks against military targets in Iran, YRK has been clashing with Iranian army since 2004.

HPJ (Women Defense Forces) is a unit of female militia operating under YRK.

PKK/KCK occupied strategic pockets of land in the Regional Administration in the North of Iraq (Mosul’s Sinjar in particular) under the pretext of fighting to fend off DAESH attacks. PKK/KCK installed large military camps on and around Mount Sinjar, creating a replica of Qandil in the area. PKK/KCK’s political offshoot in Iraq is called Tevgera Azadi (Freedom Movement).

YJS is the unit of female militia.