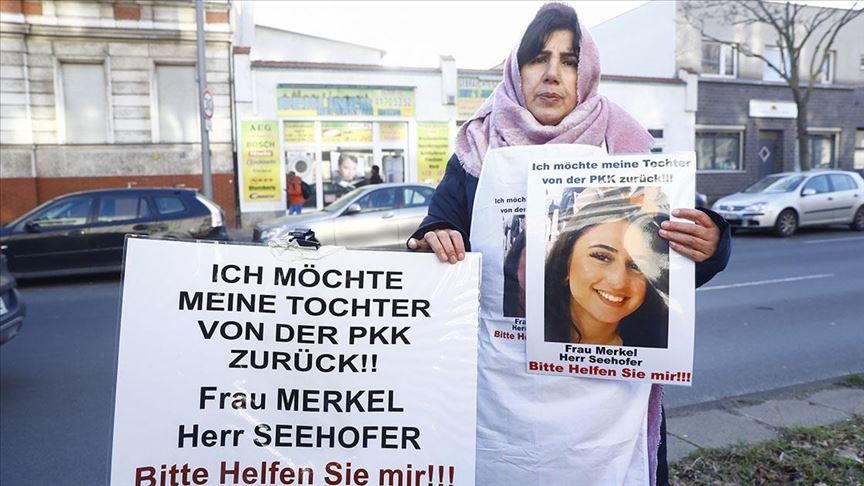 A mother of a 20-year-old girl started Saturday a lone protest in Berlin to reunite with her daughter allegedly kidnapped by the PKK terrorist organization.

She claims her daughter, Nilufer T., who went missing on Nov. 12 last year, was “tricked” by the terror group.

“Unfortunately, young people are being deceived here and taken to other European countries,” she said, adding that her daughter used to visit the association after her classes for “folk activities.”

With banners calling upon German Chancellor Angela Merkel and Interior Minister Horst Seehofer to help in the recovery of her daughter, Maide said she will protest for an hour every Friday at 4 p.m. local time (1500GMT).

“My daughter was tricked by supporters of the terrorist organization. We can’t reach her… I will continue the struggle to save her from their hands,” she said.

Addressing her daughter directly, she said that all her rights will be suspended if she remained out of Germany for another two months. “It is not worth doing this for anyone, please come back home,” she said.

The mother said although she informed the relevant German authorities, including the state police, about the incident, they refused taking any action — such as search warrant — since the daughter was over 18 years in age.

Calling upon other families whose children were also deceived by the terrorist organization, Maide urged: “Let’s be together wherever you are in Europe and stand behind our children. Let’s act together to get them back home.”

In its more than 30-year terror campaign against Turkey, the PKK — listed as a terrorist organization by Turkey, the U.S. and the EU — has been responsible for the deaths of nearly 40,000 people, including women, children, and infants.