Home blog How the YPG pitted Antifa activists against Turkey

How the YPG pitted Antifa activists against Turkey

By selling itself as a haven for leftist ideologues, the terrorist group attracted young people to join its ambitious battle to control Syrian territory.

They came from the United States, Britain, France and even Hong Kong. They were leftists, rightists, anarchists, feminists and ecology buffs. They were ex-marines, former drug addicts, misfits, adrenaline junkies or just young people sucked up in the conflicting battles of Syria.

Since 2014, hundreds of foreigners have travelled to northern Syria to join the ranks of the Marxist-Leninist YPG, which has relied on savvy PR machinery, utilising social media to find recruits.

Many of the volunteers were linked to the Anti Fascists, or Antifa, a secretive movement that has come to the fore in the US in the past year after its black-clad activists turned violent during protests.

While the YPG has been endlessly eulogised in the Western media as American allies who fiercely fought Daesh militants, little is discussed of the group’s ideology, which doesn’t tolerate dissent or difference of opinion.

Behind the glorified images of YPG’s female militants are many men who once made up the cadre of the PKK, a terrorist group that has waged a decades-old armed campaign against the Turkish state.

The PKK is responsible for more than 40,000 deaths. Besides killing soldiers, it has bombed shopping malls, killed politicians and executed hundreds of Kurdish-speaking villagers who didn’t abide by the group’s radical views.

Its jailed leader Abdullah Ocalan has evolved from being a Marxist-Leninist to someone who now adheres to what is called democratic confederalism with a dose of anarchism.

But the dark PKK-YPG history wasn’t a concern for young Americans and Europeans who joined its rank and file, for they were sold the idea of fighting bearded and brutal Daesh militants, a symbolic manifestation of evil.

The thought underpinning the Antifa movement has been around since 1946 when it emerged in Germany as opposition to Nazism.

It began to attract interest from mostly young people in recent years as far-right politicians in the US and Europe started to gain ground. 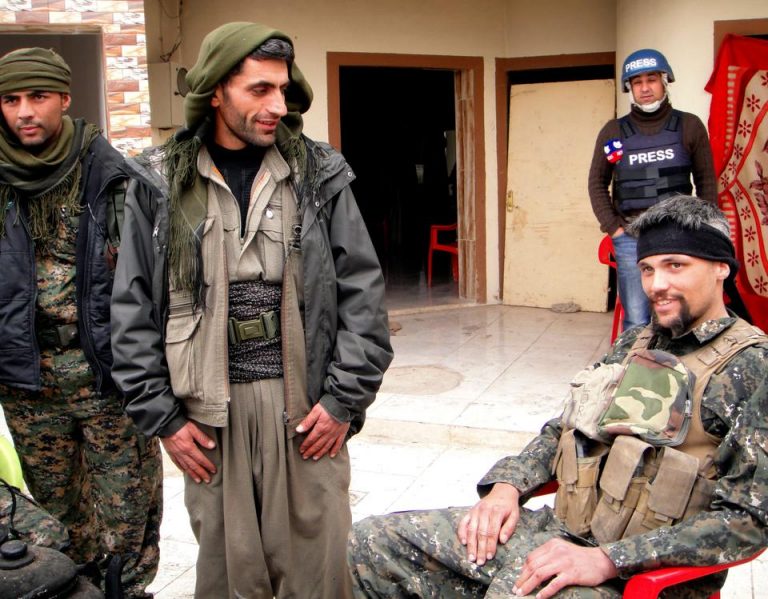 In this file photo, Jordan Matson, 28, right, a former US Army soldier can be seen with other terrorists from the YPG. (AP)

One thing that has played a significant role in its rise was social media, which has been instrumental in the organising of protests by groups such as Portland-based Rose City Antifa.

Activists share news articles and information and debate among themselves about how best to take on the far-right – even if it means turning violent.

Journalist Andy Ngo, who has a reputation for peddling the right-wing cause, was left bleeding earlier this year after Antifa supporters attacked him at a rally in Portland, Oregon.

They are known for battling far-right gatherings and shouting down opponents.

By 2014, a vast north Syrian territory had come under the YPG’s control, but it was vulnerable to Daesh. It became a celebrated cause for the international left, as foreigners began to join its ranks to keep Daesh at bay.

The wannabe militants would travel to Sulaymaniyah in Iraq, dress up as Peshmerga and smuggle themselves to Syria with the help of YPG militants. Among those who travelled like this was one Brace Belden, a florist from the US.

Belden attracted a following on social media with his provocative Twitter handle PissPigGranddad (now blocked) and the pictures he posted which showed him in ragtag YPG uniform smoking cigars and brandishing AK-47s.

But Belden had a history, as Seth Harp who wrote for Rolling Stone uncovered.

“…[H]e was a self-described lumpenproletariat, a lowlife punk and petty criminal with a heroin habit who started reading Marx and Lenin seriously in rehab,” he wrote in his article for the magazine. 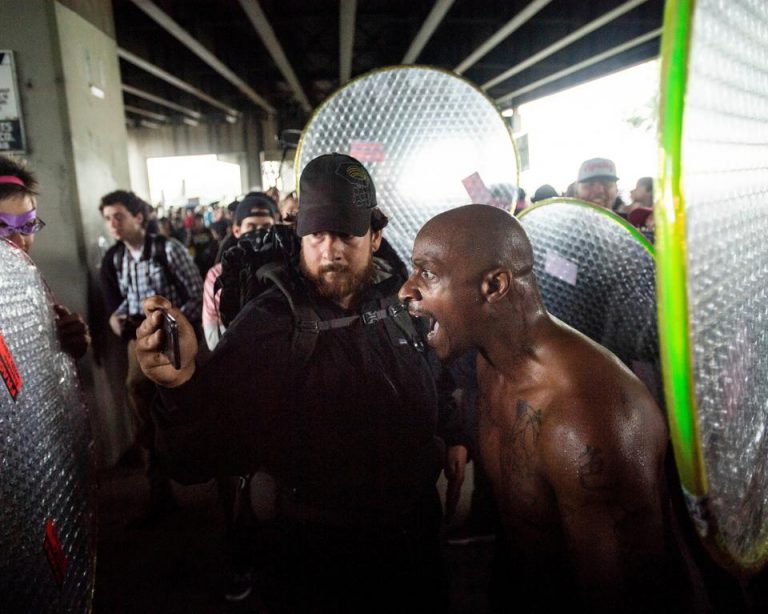 The showoff between right-wing and counter protestors have gotten ugly in past. (AP)

Another name that came to prominence was that of Hanna Bohman, a Canadian woman, who joined the YPG’s female fighting wing as she was looking for ‘purpose in life’ after a motorcycle accident.

While Daesh and other terrorist groups were under the increasing scrutiny of international cybersecurity watchdogs, the YPG was actively running a Facebook campaign to find recruits.

Former US marines who joined the YPG did so for reasons other than ideology.

In an interview with news site Vice, an unnamed activist went on to tell the story of how ‘some’ trigger-happy mercenaries seeking ‘adventure’ had penetrated the group.

One disturbing aspect is that unlike the Americans who joined Daesh, militants fighting on behalf of the YPG didn’t face any legal action upon their return.

“Judging from the ease with which more prominent Westerns make it to Syria or Iraq and then back to their home countries, the US and other Western countries have made it relatively worry-free for their citizens to join these fights,” said Malak Chabkoun, an independent Syria analyst.